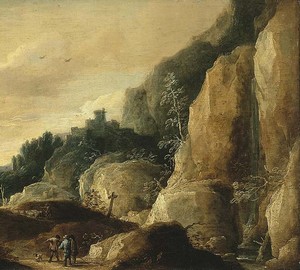 The painting, performed in 1640, resembles the fantastic landscapes of the Flemish Jos de Momer (1564-1635). Tenirs, like its predecessor, treats the landscape as a wide panorama, going to the horizon, flanked on the sides by rocks and boulders. The Tenirs canvas, created on the contrast of dark silhouettes of red-brown mountains covered with green foliage, and the light blue sky, is distinguished by a clear landscape construction.

The mountain landscape is so grand that the characters in the foreground seem toy. Compared to the landscape part, the genre motive plays a minor role in this picture. In the works of Tenirs, similar small-scale figures are often found. They serve as a reference point for spatial plans of the composition.