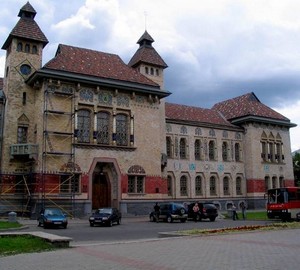 Museum of local lore in Poltava is one of the oldest and most famous museums in Ukraine. In 1891 the famous scientist, Professor I. I. Dokuchaev made a proposal to the Poltava provincial Zemstvo to establish a Museum of natural history. Dokuchaev, in the course of various expeditions on soil science, have a large collection of samples of rocks, different soil and vast herbarium.

Originally, the Zemstvo Museum, the guide gave a small outbuilding, which was located on the territory of the provincial building. After the construction of the new building to the County Council, the architect of which was V. G. Krichevsky, the Museum took its place on the third floor. The building itself was constructed in the style of Ukrainian modern, external and internal decoration of the interior was brightly expressed by Ukrainian themes. In 1909, after a visit to Poltava, Tsar Nicholas II expressed his dissatisfaction with the design of the Museum. He found it too Ukrainian, not just belonged to the Russian Empire.

The Museum building consists of three floors, the first floor of the basement, it is finished in Pink granite. Over the Central part rises a pointed roof with two towers and lateral projections. The facade is decorated with coats of arms of County-level cities of Poltava province the beginning of the twentieth century made of ceramics and majolica. Inside the building is dominated by heraldry with vegetable-flower ornament. The finish was booked in cities Opishne and Mirgorod, as well as an masters in ceramics and majolica. On the doors of the main entrance a decoration carved “tree of life”, which gives the building a special flavor.

Biologist N.And. Olechowski became the first Director of the Museum. The Philanthropist E. N. Skarzynski from Lubny was given to the Museum twenty-thousand meeting and scientific library, and p. P. Borovsky himself donated a collection of ancient Egyptian art and the work of Chinese, Japanese and Indian artists. In addition, Poltava eparchy gave from their stores, several thousand ancient ecclesiastical items. 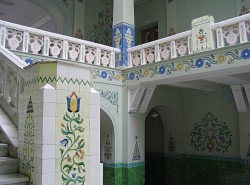 The interior of the Museum
After the revolution, the Museum occupied all the premises of the provincial Zemstvo. The exhibits appeared in the Museum, due to constant expeditions in Poltava region in the period up to 1930. In 1941 some of the collection had managed to smuggle in Tyumen and Ufa, a large part was killed after the occupation of the Nazis, part was plundered them.

For comparison: before the war in the Museum, there were more than 118 thousand items, and after the war there were only 37 thousand. Damaged the Museum building was restored only in 1964, and full interior restoration and re-exposition exhibition halls ended only in the early nineties.

Today the Museum Fund has more than 190 thousand exhibits. Here, visitors can explore antique edged weapons, armor, all sorts of household utensils and places of worship. In the historic halls of the exposition about the history of the Cossacks in Poltava land the 17th and 18th centuries, and “Poltava people in the great Patriotic war.”