Museum of theatrical, musical and cinema art of Ukraine, Kyiv 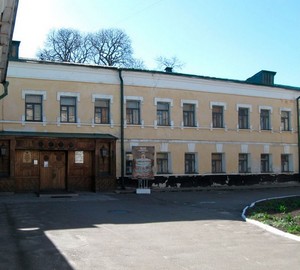 Ukraine is rich in various museums. One of them is on the territory of Kyiv-Pechersk Lavra called the Museum of theatre, music and cinema. This old two-story building, which once housed a hospital, in 1923, founded the Museum. The current exhibition has begun to add only in 1980. They reflect the historical periods of music and dramatic art, which reflect the ancient ceremonies of the games of the Ukrainian people. The Museum has about four thousand different items. Here are as permanent exhibitions and temporary exhibitions dedicated to the cinema, theatre and music art.

The Museum was initially part of the Association “Berezil” which in those days was headed by the brilliant Director Les Kurbas. Under his leadership, formed a variety of collections, which was a personal collection of V. Vasilko. They were more than 800 pieces of unique photographs and negatives. Significant contribution to the replenishment of Museum Fund was made by Ukrainian actors M. Zankovetska, I. Maryanenko, L. Lounici, A. Buchma L. Gakkebush and family Staritsky’s. The first exposition opened on the eve of 1923. But finalized the Museum only when the authorities of the Kiev provincial Executive Committee has allocated a former theatre Solovtseva. Here, under the exposition occupied three rooms, and the first exhibition opened in 1925.

But the story does not end there. In 1926, the Association “Berezil”, as the best art theater in the Ukraine and moved to the capital Kiev. All collected Museum collection was transferred to the historical-philological Department of the Ukrainian Academy of Sciences, which became the main exhibition of the theatre Museum. It consisted of two thousand items and three thousand volumes of theatre literature. The exposition is divided into four theatrical part: school, Amateur, national, revolutionary. The public saw them in 1927, after the opening of the Ukrainian theatre of the Museum. The Museum staff practiced thematic exhibitions, sometimes even travel abroad. The idyll came to an end during the repression of 1930, when the theatre “Berezil” held ideological “cleansing”. Most of the exhibits were seized and sent to the vaults, where it is safely preserved.

In the 60-ies of the last century, the Museum has begun to revive again. The government will make every effort to restore the ancient folk instruments, significantly expanding music collection, numbering 600 instruments. Among them there are exclusives is kozobas, sinfonian or hurdy-gurdy. The age of some of the rarities over 300 years.

The collection has a unique violin bows Maryanenko, whom the people called “Ukrainian Stradivari”. He made a miracle-the violin in 1910. Material for a tree, designed in a normal drying a quarter of a century. Cover violin master spent with this amber varnish, which gave it a Golden, tinged with red, color. If you look inside the tool, you can see there the portrait of the master with the images of a dozen medals, which were received at various competitions.

Today, the Museum is fully operational, but the Museum has periodically belt of the exhibition, to acquaint visitors with all exhibits, including contemporary artists.