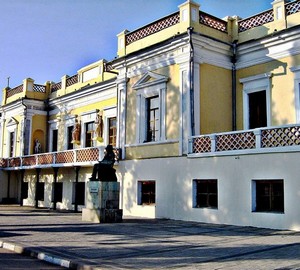 Tel: +380-65-62-30-929
Feodosiya is a beautiful city of the Crimean coast! On the shore of the Black sea, outside the city limits in 1850, the great artist of the nineteenth century I. K. Aivazovsky your project, built a large exhibition hall, which was adjoined to his house. For decorating the house were brought specially from Italy marble and ceramic sculptures that were installed around the facade of the building, which was of impressive dimensions. For the solemn reception of numerous guests of the Grand hotel has designed impressive interior. The birthday of the artist – July 29, 1880, opened a personal art gallery, which at that time was the only not only in Feodosiya, but also in Russia.

In the ninetieth year, exactly ten years after opening the gallery, the artist made a reconstruction of the rooms, redid the roof, replacing it with a large glass dome. Using such a lighting pattern in the exposition hall of the Museum has acquired a completely different color.

During his life, Aivazovsky staged numerous exhibitions of his paintings not only in Russia but also abroad. At exhibitions often the paintings were sold. Therefore the expositions of the Museum was not constant, had to be supplemented with new paintings, since the artist did not know tired and continuously wrote new and new masterpieces. Such an abundance of new paintings has fascinated art connoisseurs: they visited the gallery again and again.

Plate
The most crowded time of the visits was falling on “the velvet season” (summer and autumn), when Theodosius came to the wealthy elite of the Russian Empire. To chat with guests from the workshop down by the artist himself, what led to the indescribable delight of many audiences. Sometimes he, in the presence of visitors, even painted.

This revival lasted until 1900, after the death of Aivazovsky’s life in his gallery gradually began to fade. All the paintings and the gallery itself, under the will of the master, became the property of the city of Feodosia. By order of the city Council in the gallery were appointed caretakers, but nobody could replace the great artist. At the beginning of the first world war the paintings had to be removed to Simferopol, where they remained until 1920. At this time, all paintings were nationalized by the Soviet authorities, and in 1922, the gallery received the status of a state Museum and in 2001 the National.

One of the halls of the art gallery of Aivazovsky
Today great halls and trim on the walls, the ceilings given in the original appearance. The gallery represents a unique complex representing paintings and objects of decorative art. In the gallery there are over 12 thousand different memorial items, archival documents, exhibits, among which 417 works of the great artist Ivan Aivazovsky.

To date, under the exposition of the Museum occupied two buildings: a house painter and his sister. In addition to the art gallery, at my sister’s house, visitors are presented works by contemporary artists: Voloshin, Lagorio, Bogaevsky, Kuindzhi and other Soviet masters.