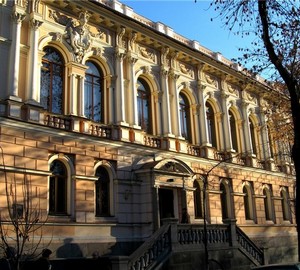 In the capital of Ukraine, city of Kiev, in a wonderful quiet corner of Tereshchenkivska street, is the Museum of arts of Bohdan and Varvara Khanenko. The Museum was given two old two-story mansion. In one of the houses previously lived Bohdan Khanenko, a well-known philanthropist of Ukraine of the beginning of the twentieth century. It was a man. With his wife Barbara they lived for more than forty years in peace and harmony.

During the time of living together they collected rare Antiques and art, a very large number of different ancient books, which he bequeathed, together with his home town. In 1917, in the month of March, according to the last will of the testator, Barbara was planning to turn his private house into a Museum of foreign art. Unfortunately their dreams were not fulfilled. The seventeenth year was a nice periodic change of power, sometimes the power changes every week. In the end, artistic value were nationalized and the Museum became a state institution. The most dishonest was that the names of the creators of the Museum of the Soviet leaders were excluded altogether, because of their noble origin and great merits of the previous government. Proletarian ideology prevailed over the minds of most people.

For many decades the existence of the Museum its name has not changed, he was still the Museum of Western and Oriental art with periodic replenishment of Museum collections. During the German occupation, the Museum suffered greatly, many collections were destroyed. Only in 1999, justice is done, and the Museum received the name of its founders. Today the Museum has more than twenty thousand pieces of various works, including a large number of classic foreign art.

The old mansion Khanenko made in the style of a Venetian Palazzo, the lobby is decorated in Baroque style, followed by the main staircase from the covered gallery. In the gallery are ancient ancient sculpture. First floor, in tribute, has the office of memorial things, documents, photographs, works of art and tomes of spouses Khanenko. The second floor of the Museum is decorated with luxurious interior of the nineteenth century. Here are the exposure of Western European art for the chronology and regionality. The style of the historicism inherent Great hall the red drawing room, the Gold room.

The exhibition showcases Italian works of 14-18 centuries, Spanish and Dutch – 15-17 centuries, paintings from France from the 17th to the 19th century. Among the masterpieces are works by Bellini, Guardi, Velazquez, Palmezzano, Rubens, Pieter Brueghel the Younger, Teniers, Bush and other famous European masters. In the exhibition there are works by Renaissance masters of the middle ages: Donatello, Lorenzo Ghiberti, Luca dela Robbia. Model Cellini and Bologna is executed in Baroque-style bronze and marble sculptures made by the masters Canova and his. In addition, a separate room contains art treasures of Ukraine: ancient Christian icons of wax paints, dated 1850 which was found in the Sinai monastery.