“Naturmort with a clock,” Antonio Pereda – overview of the painting 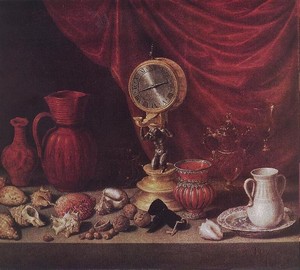 Antonio de Pereda-i-Salgado is a bright representative from a galaxy of Spanish artists, the so-called “gold” of the Baroque era. The artist is very attentive to the things that surround people. And he worthily continues the stillbirth genre begun by the great Diego Velazquez. But still life is not quite ordinary, but allegorical, in which each object has its own meaning.

In 1652, during the heyday of Antonio de Pereda’s work, he writes an interesting picture – “Naturmort with a watch.”. All details are written to the smallest details, the iridescent fabric is perfectly depicted, against the background of which the elements of the still life are placed.

The jugs, vessels and decanters are real, they seem to be from the photograph – their finish, shadows, curls, a glass teapot, almost merging with drapery, reflected light – everything is reliably and conscientiously transmitted by the author. In the center of the composition is a magnificent watch, with its weight “dressing” the faun that bent under their weight. Shells and walnuts are scattered throughout the table.

But we pay attention to the fact that all these objects are arranged and decomposed intentionally, so that the viewer thinks and unravels the morality that the artist wanted to convey. Probably, it was easier for people of the 17th century to solve the riddle given by the painter. But we will try and we will get to the essence of the plan.

So, empty shells mean a body shell that remains after the soul leaves the human body. Walnut in the Middle Ages was associated with virtue, with life, and a split nut with death. Glass vessels – with subtlety and fragility of human life. The clock speaks of the transience of our being.

All these “characters” of the Antonio Pass canvas clearly, despite the apparent simplicity, demonstrate to us the deep meaning and value of our existence in this mortal world. Wealth, vanity, pleasures – all this is fleeting, passing and perishable, but we must think about the soul and its spiritual development.