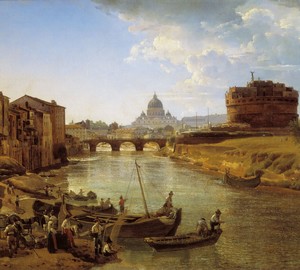 New Rome. Castle of St. Angel – Sylvester Feodosievich Shchedrin. Oil on canvas. 89 x 63 cm
The artist lived near the place that he depicted in the picture, and had the opportunity to observe this species that inspires creative exploits daily. This work marks a turning point in the work of Shchedrin – it uses techniques not characteristic of his early creations.

In the foreground are the dilapidated houses of the poor. They are located near the Tiber River. Despite the fact that old age caused them considerable damage, the houses look well-groomed. However, time takes its toll and destroys the efforts of residents to maintain the neatness of their homes.

There are boats belonging to the owners of housing nearby: some of them are prepared for swimming, others are empty.

On the shore, people do their daily affairs, not paying attention to the turbulent flow of the Chibra. The smallest details of the life of the peasants are depicted – this adds realism and distinctness to the work.

Judging by the fact that the sky looks tall and has a cold color scheme, in the picture we see an early morning breathing freshness.

In the background are the buildings of the “old” of Rome. St. Peter’s Cathedral, as well as the Castle of the Holy Angel, depict the Roman greatness remaining in the past.

The castle of the Holy Angel in ancient times was used as the tomb of the Roman rulers. After some restructuring, he was turned into a fortress, after a while – into a prison.

You can get into the castle on the Sant Angelo bridge, which appeared thanks to the efforts of ancient architects. Above is a statue of the archangel Michael, who, according to legend, appeared here in front of the pope during a plague epidemic.

The population of the inhabitants, which does not look so majestic and impeccable, expresses the idea of an emerging new life: no matter if it is better or worse than the old one – the victory will definitely be behind it. The combination of the constant and transient, sublime and mundane is the technique that gives originality to this canvas.