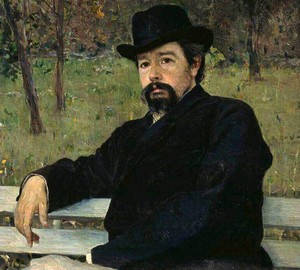 Nikolai Alexandrovich Yaroshenko – the famous Russian portrait painter, was an itinerant. He was born in 1846 in Poltava, in the family of the retired military. Artistic talent appeared very early, but his father insisted that he continued the family tradition and became a soldier.

At the age of just nine years, Nicholas entered the cadet corps in Poltava, and after graduation began to study at the Pavlovsk military school in St. Petersburg. His military training was continued in the Mikhailovsky artillery Academy.

But my passion for art, he has not forgotten, and in parallel with a military career, became involved in the Academy of arts. In addition, Nicholas took private lessons and went to evening classes at the archaeology.

After graduating from the military Academy of the future artist received a distribution in the ammunition factory. At this place in the Northern capital, he served 20 years. Five years after receiving the distribution Yaroshenko externally completed his artistic education at the Academy. While he studied, he became friends with the Wanderers – he was close to their ideas. He also spoke with representatives of the progressive intelligentsia of the writing and even held a at home kind salons for like-minded people.

A year after graduating from the Academy of fine arts, he participated in the traveling exhibition, and a year later joined the Association of traveling exhibitions and became a member of its Board, together with Ivan Kramskoy. After the death of the last more than 10 years supported the activities of the society, adopted under his predecessor.

After marrying the painter settled in Pyatigorsk, which led to the creation of numerous paintings in the North Caucasus. His paintings reflect the landscapes are so spectacular that many thought this fictional space – fantasy master. But they were so good, that brought the artist critical acclaim.

In 1885, in Kislovodsk Yaroshenko purchased a large summer house, which soon was nicknamed the “White Villa”. Here had gathered the most famous and talented people of that time, ranging from artists and writers, ending with scientists and artists.

After 17 years, the artist retired for health reasons, attaining the rank of major-General.

The master was ill with tuberculosis – the disease was a true scourge of the century. He had been impressed by the trachea that did not stop to visit Syria, Palestine, Egypt and Italy. Hot and dry climate helped to slow down the disease and improving condition of the master. This journey has led to the fact that the artist brought with him to Russia a great number of sketches, studies, drawings and finished paintings.

Painter died in Kislovodsk in 1898 of a heart attack caused by overexertion while working in the rain, in the mountains in the open air. He is buried near his beloved “White Villa”. In the creation of the monument at the grave were attended by the friends of the master – his colleagues on the Association of the Wanderers and those who often visited the St. Petersburg salons, and the famous “White Villa”.

All who knew of the artist, spoke of him as extremely honest, noble, conscientious, a very talented painter with a great talent. His paintings had a clear social focus, the portraits were of high realism and spirituality, and the scenery was full of life, color and expression. The contribution of craftsmen to the development of the Association of traveling exhibitions cannot be overestimated. All the years of his leadership the society grew rapidly and flourished, and the public were involved in directed social realistic art.

Many of the paintings are in various museums around the country, including in the Tretyakov gallery in Moscow.