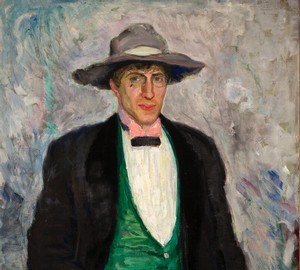 To a wide audience the name of Nikolai Astrup’s little known, but for the Norwegians, his works became a national treasure. Despite the short life, the artist managed to leave a great legacy. In stylistic direction of his work relate to expressionism, but attributed them to a specific genre would be wrong, because they have an uncommon identity. Unlike other expressionist-compatriot Edvard Munch, Astrup was an introvert and painted in the mood of peace and tranquility. The artist was a great colorist and landscape painter, he more than anyone else has managed to convey the spirit of Norwegian nature.

Nikolai Astrup was born on 30 August 1880 in the village of Bremanger. His father was a priest and wished that his son followed in his footsteps and began to serve in the Church. But in 1895, after graduating from a parochial school, the young man decided to go to Trondheim and to attend the local grammar school. There he discovered his talent of painting and decided to do self-study. Two years later, Astrup returned to his native home and became a home teacher for their brothers and sisters.

In 1899 he decided to devote himself to art, which moved to Christiania (nowadays called Oslo), where he took lessons in a private art school. His teacher was Johann Nordhagen that taught him the creation of prints and drawing naked people.

After graduation in 1901 the artist received a scholarship and traveled to Europe, then returned to Norway. At home he was waited by success – in 1905, held its first exhibition, which enthusiastically responded to criticism and the press, and the national gallery bought his painting “an Old warehouse in Lestere”. Following years of Nikolai Astrup will be eventful, it will see exhibitions in Berlin, London and Copenhagen, but in Stockholm he even meet with the Prince Eugene.

Bohemian life quickly tired Astrup. He was used to a moderate life and tried to home comfort. And helped him Engel Sunde, a young girl from the provinces, where the artist married in 1907 and later brought with her 8 children. The family began to live in the countryside, where all together kept the house. But at this time the master did not forget about creativity. Accommodation near the picturesque nature inspired the artist to create the best creations. He developed his own style in painting, where the real landscapes are infused with incredible geometric shapes. In addition to colourful, pastoral paintings Astrup created a workshop schedule, which was noted by his teachers.

In 1919 the artist began to manifest serious disease, which he was forced to cancel his creative trip. It turned out that Nikolai Astrup suffered from asthma and tuberculosis. In 1922, the master and his wife managed to travel to Algeria via Germany and Italy. Before returning home in 1923, the couple stayed in Paris. In 1928, exhausted by illness, the artist died. After the death of Astrup, his work for a long time was neglected, but over time, connoisseurs recognized his invaluable contribution to Norwegian art.