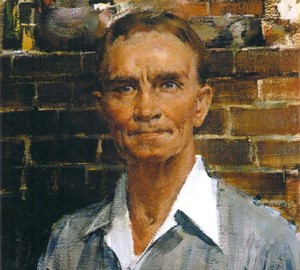 Talent Feshin Nikolay Ivanovich, all the while, he is a painter, sculptor, wood Carver, master of decorative and applied art, photographer, teacher.

Feshin was born in Kazan in 1881, in the family of the workman – Carver of the iconostasis. Despite the soreness, Nicholas showed talent for drawing and was apprenticed by his father at a local art school.

As later wrote in his biography Feshin, he was very friendly with my father, and every summer they traveled from village to village, carried out the orders on the thread. The trip left an indelible impression on his future creativity: nature, people and their customs, with the national colors – all this laid the Foundation in the children’s minds.

One of his first student, but already drawing the attention of the works was the painting “the homeless”.

After school, his best student, recommend to the Academy of fine arts, where Feshin and entered the workshop of the famous artist Repin.

From 1901 to 1909 Feshin studies in Saint-Petersburg. The financial situation of the Nicholas heavy, but in the city more opportunities to earn: he makes sketches, illustrations, cartoons, designs posters.

Feshin is actively involved in the academic life, his teacher Repin, the sculptor salemann, R. K., and others, are shaping the young artist. The work of men “out of the catacombs after the prayer” receives the 1st prize of the Academy of arts. The summer Nicholas is committed to relatives in the Volga region, hones skills, fulfills recognizable in the future, boldly and free flight brush.
At the time of study Fechin had a historic event in 1905. The young man takes your attitude, known for his sketches about revolutionary subjects, “in 1905 at the plant”, “Execution”.

By the end of the Academy Feshin was formed as ordinary, individual artist. He’s changing painting techniques, through experiments with paint and primer, painting becomes more resistant, bright.

The most famous works Feshin during this period are – “Cheremis wedding”, “Lady in purple”, the diploma “the Cabbage”.

In 1909 he was awarded the title of the artist and issued a grant for foreign tour that he made in 1910 year, visiting Germany, Italy, Austria.

Kazan art school that once produced the Feshin, in 1910, invites his teacher stay at the school. From the memoirs of Nikolai, it was a wonderful period of his life, he is not concerned about domestic problems, lots worked.

Feshin manifests itself as a competent authoritative teacher. He took the style of teaching Repin I. E. – democratic, not to impose his authority, but noticing the individuality of each student and not preventing it to develop into something more.

1911-1917 years period portraits – N. A. Sapozhnikova, Vari Adoratsky, father and other. After his marriage in 1913 on a former student belkovich Alexandra Nikolaevna, there is a series of portraits of his wife and later daughter AI. In 1914, completed work on his famous painting “Pouring”.

Nikolai Ivanovich actively participates in exhibitions and is member of various art commissions accepted into the society of Peredvizhniki. By 1917 he is an academician of painting.

In connection with the revolution of 1917, life in Kazan freezes, primarily because of the elementary problems with heating, food, electricity.

The artist feels that he is losing the sense of creativity, his bouts of melancholy and depression. In 1923, he decides to leave Russia and to emigrate with his family to the U.S. in new York.

The first work, which was written Feshin on the American continent, is “Portrait of Jack hater”, the art collector and the man who helped him with the move.

Quickly and easily Feshin joined the creative atmosphere in new York: he leads workshops, teaches at the local Academy of arts in 1924 held his solo exhibition in Chicago. Interpreter and assistant to him is the wife.

In 1927, Fechin buys land in the state of new Mexico, in the town of Taos the centre of Indian culture. The house is built on the sketches of Nikolay Ivanovich.

In 1934 Feshina divorce and Nikolai with her daughter went to new York and then in California in Los Angeles. His paintings sold, he travels, enjoys photography, war, portraits of generals and gives private lessons.

In 1955 Nikolai Ivanovich Feshin died. In 1976, the artist’s daughter reburied his father in Kazan, according to his will.
Picture N. I. Feshin are in the museums of Kazan, St. Petersburg, Washington D.C., Seattle, London, and in private collections. At his home in Taos, organized house Museum.