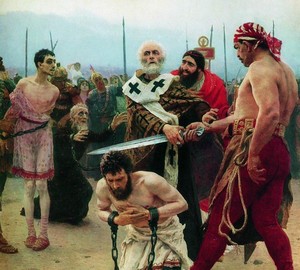 Nikolay Mirlikiysky relieves the death of three innocently convicted persons – Ilya Efimovich Repin. 1895. Oil on canvas. 215 x 196 cm
The presented work is not just an appeal to one of the biblical stories – it was a relevant topic for Russia, and Ilya Repin did not fail to respond to it. The thing is that in 1887 Lev Tolstoy made a hot moral sermon proclaiming the abolition of the death penalty.

The actions of the revered Russian saint Nikolai the Miracle Worker once managed to prevent the unjust execution of three convicts who fell victim to the greed of the corrupt world mayor Eustafiy. It is not surprising that Repin, in his youth who heard as a talented “hogomaz” (the icon painter), found a semantic connection between the actions of Nikolai Ugodnik and the sermon of Count Tolstoy.

The picture was preceded by scrupulous work – collecting information, sketches, sketching of individual heroes. The author was so imbued with a plot that he even created several options for paintings that differ in composition and size.

The work was first presented at the 17th traveling exhibition and impressed the public by collecting many flattering reviews, including Leo Tolstoy. Emperor Alexander III bought the work, and, according to legend, it was this picture that prompted the sovereign to establish the Russian Museum, where today the dramatic multi-figure canvas is exhibited.