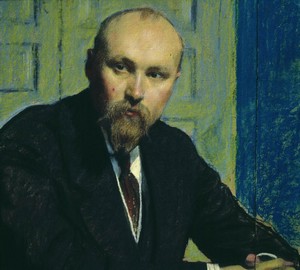 Nikolay Konstantinovich Roerich is a true phenomenon in Russian and world culture. People of unique abilities, artist, writer, archaeologist, scientist, philosopher, designer, and mystic, spiritual teacher of several generations of people – all these characteristics belong to the same person.

For a long life, and lived Roerich 73 the completed permanent works of the year, the master has created more than 7,000 paintings and wrote more than 30 books, two of which are poetic works. Among his achievements included the establishment of the international cultural movement “Banner of peace” and “Peace through culture”. Roerich gave the idea and founded a Treaty on the protection of artistic and scientific institutions and historic monuments known as the Roerich Pact. In India he founded the Institute of Himalayan studies “Urusvati”, and also many other societies and educational institutions.

Nicholas Roerich was born in 1874 in St. Petersburg in the family of a notary and a public figure. His mother was from a merchant family. In addition to Nicholas’s family had two sons – Boris and Vladimir.

From an early age, young Nicholas was interested in art, archeology and painting. He was attracted not only to Russian historical heritage, but also material and spiritual culture of the East.

After graduating in 1893, the gymnasium, Roerich simultaneously studying at the University of Saint-Petersburg at the faculty of law and at the Imperial Academy of arts. Two years later, he studied at the famous artist Arkhip Kuindzhi. At the same time, Roerich organizes independent archaeological expedition. He manages to find a large number of monuments of different epochs and gather a collection of tools of the Neolithic period.

In 1897 he finishes training in Academy of arts. His paintings executed in Russian style on historical and legendary themes. They were highly appreciated by prominent people of the era, including Leo Tolstoy, as a thesis bought myself Tretyakov.

Two years later the talented artist married Helena Shaposhnikova, with which you can live life in perfect harmony. They will be born two sons, both become famous and talented people.

This period of his life was marked by his many achievements and works. He had the opportunity to work in different genres, to paint frescoes in churches, to create monumental canvases, work for registration of performances.

The revolution began Roerich in Finland, where he restored health. Back in Russia it was not destined. Only in the Soviet time he will visit his homeland on business.

In 1919 – 1920 he lives in London, where he participated in the famous ballet productions of Sergey Diaghilev. Here together with his wife he becomes a member of the Theosophical society founded by Helena Blavatsky. After that, he expects a three-year tour of America. To him three more times to return, but in a very short period of time.

He was always attracted to India with its ancient philosophy and a special attitude to life. In search of spiritual enlightenment Roerich and his family falls in the Himalayas, where he finds his second home. Under his leadership, organized the Central-Asian expedition. She tried to get into the then forbidden Tibet, but this was never meant to be.

Indian period Roerich saw the creation of many paintings, which were marked by unusual expression and distinctive style of the image. During these years, the scientist and the artist, the public figure has managed to do so much, that would be enough for a dozen lives. He died in 1947, never knowing that he refused to return to beloved them home.