Nymph Callisto on the chariot of Jupiter, Baldassare Peruzzi 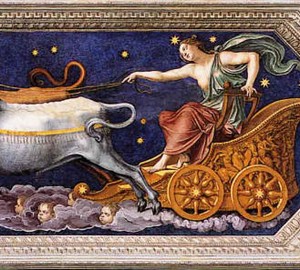 Nymph Callisto on the chariot of Jupiter – Baldassare Perutzzi. Around 1511. Fresco
This is one of the frescoes written by the artist in 1511-1512. on the arches of the former open loggia villa Farnesin in Rome, built and decorated according to the project of Peruzzi. The fragment depicts Callisto, rushing on a golden chariot across the starry sky. Two bulls are being taken from the cloud, and the paths that personify the winds look out of the cloud.

There is an assumption that the picture has some astrological meaning: a bull means the zodiac constellation Taurus, ascending through the constellation Ursa Major, whose symbol is Callisto (her placed Jupiter in heaven after Juno turned her into a bear). Other parts of the arch depict complex astrological scenes, and they are believed to all serve as the horoscope of Agostino Kiji, the owner of the villa. Part of the villa’s arch is painted by Raphael – fresco Triumph of Galatei.