“On a swing”, Nikolai Alexandrovich Yaroshenko – overview of the painting 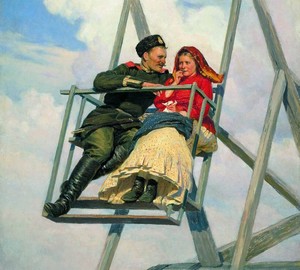 Events take place in the Kaluga province on Spirits Day – a very important Christian holiday associated in Russia with many preserved pagan rites. It was believed that on the night before the Spirit of the day, the Holy Spirit descends to the earth and spills over houses and fields.

The fact that the maid, calmly accepting the signs of attention, and the soldier caring for her with perfected art, have united right now, is no coincidence. After all, love (and simple human love is higher than sublime and heroic at the wrong time) is the Holy Spirit, the descent of which is looking forward to this holiday.

The author emphasized the bribing simplicity: we see that the maid is sitting, as if eating seeds had nothing to happen, and the soldier, not at all despondent, continues to try to charm her.

But behind this unpretentious love game you can see that bright, joyful feeling that is familiar to everyone who was in love.

It leads to certain thoughts that the pair on the swing is depicted against the sky. Some sublime, heavenly context of what is happening is being traced.

The picture is a frame snatched from fun hours of the holiday.

Fun, love, Holy spirit, deity. The picture awakens the brightest feelings in the audience. From their awakening, not far from a complete internal transformation that changes life so that good and beautiful come forward, and all evil and selfish remains far behind.

It is safe to say that the author, whose impeccable moral character was noted by many, was what he wanted to achieve.