On the boulevard, Vladimir Egorovich Makovsky 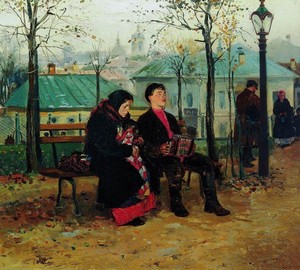 On the boulevard – Vladimir Egorovich Makovsky. 1886-1887. Oil on canvas. 53×68
The painting “On Boulevard” was written in 1877 and is dedicated to one of the most acute problems of Russia at that time – the forced departure of peasants to the city for earnings, which ultimately led to the collapse of the traditional way of life of Russian villages: the breadwinner of the family broke away from elderly parents (roots) wives and children (family) the subtle connection between them was lost or weakened, and all this led to the death of the patriarchal world.

The heroes of the canvas are a young husband who is on earnings in the city, and a wife and child who came to him from the village. They have nowhere to stay and talk together except here on the street on the boulevard, but the spouse does not seem to be interested in his missus at all. He is recklessly playing on an accordion. A fat-shaped, tipsy, “urban” husband fell apart on a bench, famously breaking his cap, as if he were not interested in anything but his own person. The poor woman, bent from sadness and hopelessness, will not recognize her beloved. A simple plot contained many sharp thoughts and observations of the author, which filled the whole, at first glance, simple and small plot, and the most important of them is the inevitable death of the patriarchal world.