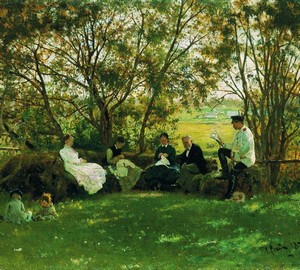 The work of the great master depicts a hot noon. Before us is a family fleeing the summer heat in the shade of trees. Natural gazebo is equipped with a comfortable bench made of turf. The portrayed group undoubtedly poses to the artist.

The compositional group can be divided into the center and two extreme figures. In the center is an elderly couple (parents of Repin’s wife) and a girl with needlework (Repin’s wife’s sister). The central group seems to be unhappy with its role. The artist’s attention burdens them. But a woman (Faith Alekseevna Repina is the artist’s wife) sitting on the left enjoys positioning. The man on the right (the husband of the sister of Repin’s wife) – took a picture pose, his attitude to the process is condescendingly-frivolous. Only a couple of children playing on the grass (Faith and Nadia – the daughters of Repin) behave naturally and organically.

The scenery of the plot of the picture is a hot summer, lined with lush greenery, which gives the work an atmosphere of carefree relaxation and quiet family happiness.