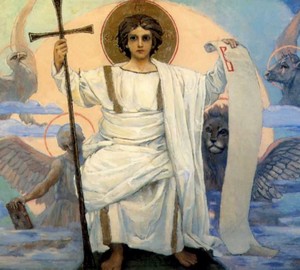 The only begotten son of the Word of God is Vassnetsov Viktor Mikhailovich. Sketch of the Vladimir Cathedral in Kiev. 1885 – 1886. Oil on canvas

This canvas reflected a deep knowledge of the Vasnetsov Bible, because the artist studied at a theological seminary. The sketch depicts Jesus Christ in the guise of a young man surrounded by Tetramorph. This is a creature with four cladings and wings, which is mentioned in the visions of the prophet Ezekiel. Tetramorph also arises in the Apocalypse of John the Evangelist, where he has the appearance of four creatures – a man, a bull, an eagle and a lion. They are called to defend the four edges of God’s throne and paradise limits.

In later times, Tetramorph began to be associated with evangelists (Luke – bull, Mark – lion, Matthew – angel and John – eagle). On the canvas of Vasnetsov, young Christ, who bears the word of God to people, supports four symbolic images of evangelists against the background of light clouds and the distant radiance of the luminary.

The color scheme of the sketch is very tender and airy, reflecting the celestial pigeon. The white robes of Christ make his figure literally luminous, and an almost symmetrical composition captures the attention of the one looking at his face. Surprises the deviation from the canonical image of Jesus – he does not look in front of him like icons, penetrating his eyes into the soul of the image facing. His gaze is set aside. The sacred animals of Tetramorf are made in soft, pearl colors.

Interestingly, symbolic images of evangelists in the form of animals were allowed only in old-timacy.