“Oral account. At the Rachinsky public school ”, Bogdanov-Belsky – overview of the painting 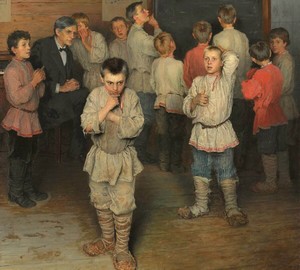 The creative fate of the Russian painter Nikolai Petrovich Bogdanov-Belsky was unusually formed. Probably every resident of Russia at least once saw his work, but rarely anyone remembers the name of the author. But many of his works can be called textbook. This includes the work “Oral Account. At the Rachinsky public school. ”.

Perhaps she herself is better known than the author. In old Soviet textbooks and math books for schoolchildren, it can certainly be found.

It is not pleasant, first of all, the reality of the actors, many subsequently recognized their fathers, grandfathers and great-grandfathers in them.

The picture depicts a classroom in the school of the village of Tatevo, Tverskoy region. The school existed until 1974. Now it organizes and operates a museum of local lore.

There is a math lesson, an example for an oral account is set on the board. The task is very picky and all the boys with enthusiasm plunged into her decision.

Ordinary village children in bast shoes and shirts, but how much torture, excitement, mind is in their eyes.

One of the guys stands at the board in the mind making calculations. Two on the right are discussing a possible solution. One of the boys probably tells the teacher a ready answer.

Especially expressive are two students in the foreground. “This is the task” – with a gesture of his hand, scratching his head, “says” the white-haired boy at a distance. The expression on the face and the deeply thoughtful look of the first guy suggest that for another minute the correct answer will be calculated.

Bogdanov-Belsky with love and warmth draws rural children, whom he always considered to be darned, sincere and talented.

On the left, a teacher sits near the wall of the braids. This is a real portrait of the founder of public schools – Rachinsky Sergey Alexandrovich. The most unique person of his time – originating from Polish nobles, professor at the University of Moscow, a nerd scientist, mathematician, enlightener, and enthusiast teacher – at his own expense created a public school with a very creative atmosphere, instilling in children thinking skills and teaching the necessary sciences.

There were not so many sciences, but among them was the teaching of the Law of God. Rachinsky believed that knowledge of Church Slavonic literacy, church services and singing provides the key to success in other sciences and in life. Perhaps that is why on the wall we see a reproduction of the icon of Our Lady and a poster with notes.

But, of course, it was mathematics that was the favorite and main subject in the education system in Racinsky schools.

Bogdanov-Belsky expressed gratitude to his dear teacher, who played a decisive role in his life, and also captured the simple village children dear to his heart, once again proving that the children are always gifted regardless of their origin.

The painting is located in the Tretyakov Gallery and people always stop near it. She can’t go through just like that. They stop only in order to try to solve the problem from the school board yourself.

By the way, the correct answer of the mathematical charade is very simple – the number two.