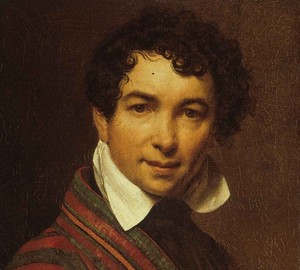 Orest Adamovich Kiprensky — Russian portrait painter of genius, a painter and graphic artist, people complex and interesting destiny. As Leonardo da Vinci, he was born out of wedlock, but unlike the Titan of the Renaissance, in his youth, had to go to slavery — as it was the illegitimate child of the landowner, official information was a serf and was listed as a son of Adam Schwalbe, of the serf, who was married to his mother after the birth of a child from the landowner Dikanova. Birthplace of the famous master of portraiture in the territory of present Leningrad region, in the village Nezhnovo, in March, 1782.

At the age of only six years, the future artist Kiprensky was given his freedom and got rid of the stigma of serfdom, which would never allow him to rise above the barnyard. We must pay tribute to his father — child was doing, he ensured the future that did not all the fathers of illegitimate children. He even got popular at that time, the name and lyric name. Presumably, it was formed from the name of Aphrodite of Cyprus — Kipridy.

Boy sent to study in an Educational school at the Academy of arts in St. Petersburg. Then a talented young man was admitted into the Academy. In total he successfully studied for 15 years, after graduating from the Academy with a gold medal. It is right to give the valedictorian for the trip abroad, but to use it the artist was able much later due to military action.

The artist lived and worked for several years in Moscow, Tver and St. Petersburg, until in 1828 settled in Italy. There he waited for another sharp turn and a real love of my life. He married an Italian, and even the need to abandon the faith and become a Catholic didn’t stop him from the plunge.

The future and the profile of the artist’s work led to his training at the Academy of arts in the class of historical painting from the famous masters-portrait Ugryumova. Although it can be argued that the makings of a brilliant master of chamber and ceremonial portrait he had in his childhood. At the age of just 12 years old he painted a portrait of his adoptive father Schwalbe in such a masterly technique that the picture was taken for the work of Rembrandt.

But in the “adult” works of the artist there is a clear departure from the image “in imitation of Rembrandt.” His Mature work has a more airy, often using bright and gentle colors, they have more realism and sophistication than tragedy. One of the most famous works of Kiprensky was the portrait of a hussar Denis Davydov, hero of the Patriotic war of 1812. For him, the master has deservedly received the honorary title of academician.

This portrait is impressive and with the right composition, and expressive, lively face of the legendary partisan-hussar, relaxed, natural pose. In the canvas used two clean, open-colors — red for the coat and white leggings. Their succulence diluted soft blurred background colors and many small details that seamlessly flow into the General outline of the image.

In the portrait a lot of small details that can be considered infinite. This is a gold sewing dromana, neat fur edging, silk tassels and braiding on belt and sword of a war hero, graceful figure of his nifty boots, the feathers on the hat that lies at his feet.

During his very short life he created a vivid gallery of evocative and memorable portraits, including a portrait of the great poet Alexander Pushkin. He died in his beloved Italy, not having severe inflammation of the lungs, in 1836. The monument on his grave put a grateful Russian artists living in this country.