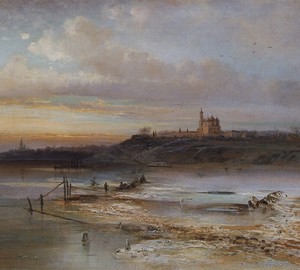 Savrasov lived in Yaroslavl in 1870-1871. He walked around the city and its environs, resting, sketching paintings and thinking about the fate of Russia. “Silent life in Yaroslavl allows me to deal with art in a concentrated manner,” the artist wrote. The author took to Moscow an impressive baggage of new impressions, which helped him paint this picture in 1874.

A winter cold, an impregnable and annoying companion of a Russian person, rarely leaves him alone. Spring is a long-awaited time for him when the cold is preparing to retreat and finally give him a short break. Her parish is marked by a thaw, which Savrasov especially liked to portray (it is enough to say that among his works four contain the word “heat” in his name).

The picture depicts a river that spills and fills the vast expanses. Pieces of ice that hit her abyss are doomed to perish, absorbed by her. It’s going to sunset. Gold and dark purple colors of the sky are reflected in the water surface. Flight birds, inspired by the arrival of spring, return home.

On the rise stands a church with domes covered with earth and heaven – a symbol of the divine involvement in the beauty depicted in the picture. In this work of the master, as in all others, his conviction is expressed that everything is beautiful, earthly and heavenly, one in its own essence.

On his canvas A. K. Savrasov did not portray anything supernatural, nothing that attracted the connoisseur with his unusualness, did not apply solutions that were striking in their surprise. However, it is in this simplicity, combined with the accuracy of the details, that the author’s originality is expressed. It is this simplicity that creates the feeling that you see something painfully familiar and dear, experience that so often takes possession of a person at the moment of enjoying the paintings of a great painter.