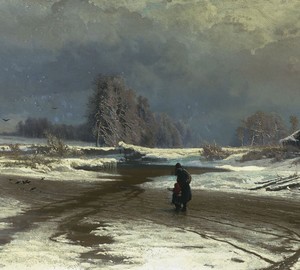 Ottepel – Fedor Aleksandrovich Vasiliev. Oil on canvas. 53.5 x 107 cm
The landscape “Ottepel” is one of the most famous works of Fedor Vasiliev, thanks to which the artist received recognition and fame. Creating a picture, Vasiliev was inspired by his trip to the Volga in 1870.

The canvas depicts the period of early spring, when winter has not yet completely receded. The viewer sees a country road in the middle of a melted dirty snow; it is blurred from constant bad weather, in the snow – traces of peasant carts. A strip of melt water crosses the road. The artist wrote snow with small small small small tassels, which made it possible to depict his porosity – the heterogeneity that the snowmen gain with the beginning of spring and the advent of heat.

The sky, like the snow, yellowish-gray, is tightened with clouds. On the left are small bushes, on the right you can see a peasant hut with a snow-covered roof, and most of the background is occupied by forests.

On the road go man and child. The boy points to birds that have flooded the road in search of food. It would seem that the presence of people should make the atmosphere of the picture more comfortable, remove the feeling of loneliness, but no – their small figures in the midst of a large harsh landscape only reinforce the unpleasant sense of doom. Their images convey one of the meanings of the work – the difficulties of the peasant life and the Russian people as a whole.

The atmosphere of the picture is complemented by its monotonous, dim color palette: depicting both the sky and the earth, the artist used predominantly yellow, brown and gray shades – the colors of the disease, decline and despondency.

To make the work even more depressing, Vasiliev addressed the features of the composition: the canvas is pulled horizontally, which makes the road even longer and heavier. In addition, the artist departs from the canons of painting: the forest strip in the background is not one, but consists of three groups, emphasizing the feeling of emptiness. The cloud hanging over the ground, as if deepening the space of the picture, immersing the viewer in it.

In the spring of 1871, Ottepel got to the competitive exhibition hosted by the Society for the Promotion of Artists, and won the first prize there. Her success was not limited to this: the prince and the future emperor of the Russian Empire, Alexander III, ordered for himself an author’s repetition of the canvas, and a year later it already hit foreign spectators at an international exhibition in London. Speaking about the merits of the picture, critics noted that its creator showed a mature view of the world, using new unusual techniques. Ottepel has become one of the cult landscapes of Russian painting of the 19th century.