Painter in his workshop, David Tenirs the Younger, 1641 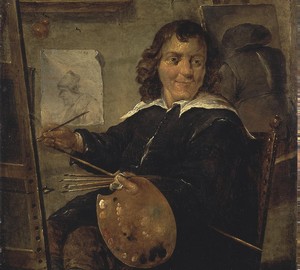 The painter in his workshop is David Tenirs the Younger. 1641. Wood, butter. 25.5×25.1
At one time, the work was called the Tenirs self-portrait (Smolskaya 1962). Although the assumption is not currently confirmed, the picture is largely autobiographical. In any case, it expressed the ideas of Tenirs about the artist-gater of his time. The non-casist and squatted figure, short, shattered hands with thumbs, are striking. But at the same time, it is clear how cleverly these hands hold their hands and a palette with paints, which the depicted, apparently, owns perfectly. The artist’s face is simply, but it glows with sincere goodwill. On this contrast between the external unattractiveness and the inner beauty of the creative personality, the image of a Tenirsian painter is built.

In the early subscription “Autoportrait”, depicted in the background on the right apprentice sitting behind a easel with his back to the audience. A similar student figure is also visible in this picture. She repeats the composition “Auto Portrait” in mirror image, but the faces of the painters on two comparable portraits are noticeably different from each other.