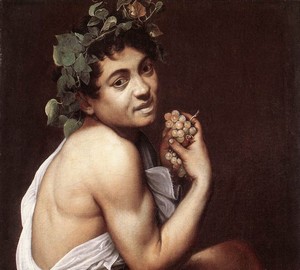 The first signs of drama, which marked the mature painting of Caravaggio, appeared in this picture, written after his stay in the hospital. Having been between life and death for a long time, he then often turned to this state in his canvases.

But while the theme of the brandy of being, young Caravaggio beat with humor: he presented himself, who had not yet recovered from a heavy illness, as can be seen from pale skin, a greenish shade of his face, weakness of his hand holding a bunch of grapes, he presented in the image of Wack. The Greek god of wine and fun sits in the very outfit in which the painter will portray him a couple of years later in the picture, which is now in the Uffizi gallery: the white cloak is captured by a dark belt tied with a bow. But if Wakh on the canvas from Uffizi is depicted as healthy, blooming and namously playing the end of his couch, then this one is weak and does not think to tease or amuse anyone. On his head is a half-faded wreath, woven not from grape leaves at all, as expected. And this is not Wackh at all, but a mortal dressed up for them.

Life as it is, with its suffering, a person’s weakness and his attempts to preserve himself, is a topic that over time has become the leader in the work of Caravaggio. The real drama then unfolded on its canvases. In the meantime, he joked about the earthly nature of man and thereby tried to rise a little above her.