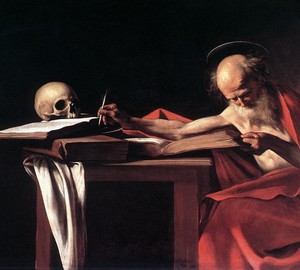 In this picture, written by Caravaggio specifically for Shipion Borghese, the artist portrayed St. Jerome behind his learned works.

The light pouring through an invisible window picks up the red robe of the saint from the twilight, his head with a cool, convex forehead of the thinker, a book lying on the table skull. “Caravaggio… gained more and more fame every day, – biographer Giovanni Pietro Bellori wrote about him, mainly thanks to the color, – not soft and light as before, but saturated, with strong shadows, and he often used a lot of black to give forms relief. And before that, he became interested in this manner, that not one of his figures was released more in the sun, but placed them in a closed room… using a ray of light that vertically falls on the main parts of the figure, leaving everything else in the shade so that the cut-off gives a sharp effect. The then Roman painters were delighted with this innovation, especially young ones…”

Saint Jerome, one of the church fathers, the translator of the Bible into Latin, is immersed in reading the divine Book, on his forehead – the seal of extreme concentration, the pen froze in his hand. At the same time, the image created by the artist also resembles the life of the hero of the picture in the desert, where he prayed and repented of sins, as evidenced by his robe of the hermit. The skull, one of the attributes of Jerome, illustrates the Latin saying “memento mori” – “Remember Death”, but also symbolizes the victory of the human spirit over mortal flesh. Between this symbol and the saint is the unfolding Bible as a path that must be passed from the life of a mere mortal to the heights of the spirit. A horizontal composition, so beloved by the artist, indicates this long distance, but the hand with the pen reduces it.