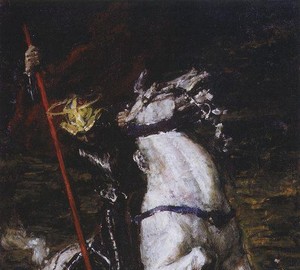 Georgy Victorosets – Valentin Aleksandrovich Serov. 1885. Oil on canvas. 136×70
At its core, the painting “George the Victorious” is an icon: plot, composition, some details (nimbus above the hero’s head). Despite this, Serov violates all canonical rules of iconography. His work is filled with realism, emotionality, action.

A canonical plot about the victory of St. George over the serpent appears before the audience. Against a dark, almost black background, only the horse of the hero stands out, masterfully depicted by Serov. Before us, the climax of the battle is the defeat of the snake.

George the Victorious himself is depicted very miniature, fragile. There is nothing in it from the hero, strong man or hero. It is rather Don Quixote, judging by his helmet and chivalrous armor. In the hand of the holy rider is a long spear painted red. A spear strikes a snake at one end, while others rest against the black sky. The artist thereby wants to say that only the help of God helped St. George win. He is only a weapon in the hands of the Lord.

The outcome of the battle is a foregone conclusion, but the battle is not yet over. The artist gives the viewer the opportunity to think over the final on his own. Apparently, we only have a sketch, a sketch. But this does not at all reduce the impression of work.