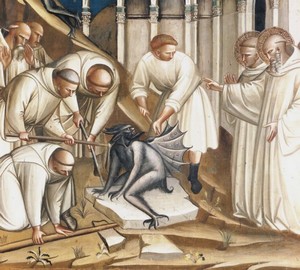 Heavy stone – Spinello Aretino. 1387
In 1387. Spinello Aretino wrote a series of frescoes on the theme of the life of St. Benedict in the sacristy of the church of San Minyato, located on a mountainside over Florence. As the founder of the first major monastic order in the West, Benedict is often portrayed as the builder of mansional monasteries: for example, in a fresco cycle in a monastery on Mount Oliveto Maggiore, near Siena, this topic is interpreted in a more sophisticated manner. Judging by the legends of St. Benedict retold in the Dialogs of St. Gregory the Great, he enjoyed great fame and reverence as a miracle worker and exorcist.

On the scene presented here, Spinello Aretino depicted an episode associated with the first of the constructed St. Benedict of the monasteries on Mount Cassino. Monks in white robes cannot raise the stone plate they need to build, because the devil sits on it (displayed in a traditional style – with a tail, black webbed wings, like a bat, and clawed paws). St. Benedict raises his hand to expel the demon, who is in a hurry to get out in dismay.

SV. BENEDICT. Benedict (approx. 480-547 years old. n. e.) was born in Umbria; having gone to Rome to study, he abandoned the dissolute urban life in order to become a hermit. Around 529. he founded his order, the first in Europe, on Mount Cassino. His fame spread everywhere, and the leader of the Totil Islands listened to his advice. St. Benedict was buried in the same tomb with his sister St. Scholastic.

In addition, little is known about his life, but there are many legends. Here are some of them: Benedict’s nanny followed him to Rome, where she lent a sieve; when it fell apart, Benedict miraculously restored it. As a hermit, he was fed by a monk who let him know that the food was brought, pulling the rope, to the other end of which a bell was attached. Benedict asked the Monk brothers to lead a more rigorous life, because of which they tried to poison him: when Benedict read the blessing over a glass containing poison, he crashed into smithereens, as if from a stone strike. Mavrius and Placid were two young men entrusted to his concerns. When Placid fell into the stormy river, Benedict made the Mavrius save his friend by walking along the surface of the water and pulling him out of the river by the hair.

The villain tried to poison Benedict with a slice of bread, but the saint ordered the raven to fly away with the poisoned crowbar, and the priest was crushed by a collapsed building. Benedict threatened two nuns with immediate separation from the Church if they did not stop gossiping. Ignoring this warning, a few days later they died and were buried in the church. At Mass, the deacon ordered those who did not belong to the Church to go out: and these two nuns got out of the graves and left the church.

Benedict cast out demons from the possessed and healed the sick. Usually he is portrayed as a gray-haired elder. He may wear either the black cassock of the order to which he belonged at the beginning, or the white cassock of the order he reformed. His attributes are a raven or raven, as well as a broken tray.