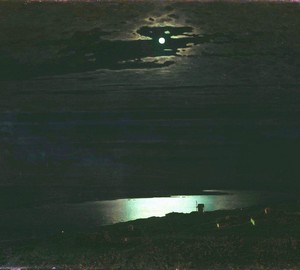 For a long time, the author did not dare to present this work to the general public. The artist for a long time selected the premises for its placement. He was engaged in lighting of the canvas surrounding her interior. To make sure that the work makes the necessary impression on the viewer, the master invites friends to his workshop: Turgenev, Mendeleev, Kramsky. Finally, when there is no doubt left, the author arranges a mono-exhibition. There is only one work in the exposition…

To see the new masterpiece of the master, people came a few hours before the opening of the exposition and lined up in a long line. There was no end to the enthusiasm. Criticism was choked. The hype was also supported by what became known – the Grand Duke Konstantin Konstantin Konstantinovich bought the painting, a famous connoisseur of painting, a poet and playwright.

The audience was attracted to the picture by a skilled moonlight pouring the water surface of the Dnieper. The color scheme of the picture is simple, but expressive, the lines are accurate and ghostly at the same time.

It is known that the artist made the paints on his own. This time the composition was not very reliable. In addition, after public shows, the Grand Duke placed his work on his yacht and went on a long voyage. Dampness and cool air have led the work to darken. However, she did not lose a single drop of her mystery and attractiveness.