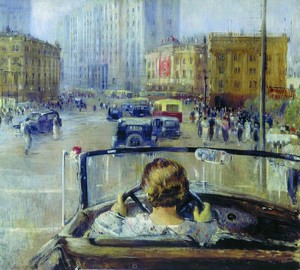 New Moscow – Yuri (George) Ivanovich Pimenov. 1937. Oil on canvas. 140×170
Since the mid-1930s, Pimenov (1903-1977), one of the founders of the Society of Stancovists, has been working on a series of paintings about Moscow, among which the New Moscow canvas has become especially popular.

Artists with sincere enthusiasm worked on the creation of a new Soviet mythology, which required other forms. The painting “New Moscow” is quite consistent with the spirit of the times. In the foreground is a woman driving a car, which is an unprecedented phenomenon for the 1930s. The viewer seems to be sitting behind her and watching the morning updated Moscow from an open car. The monolithic thug of the newly erected building of Gosplan, free avenue and a shir of squares, the scarlet letter of the recently opened subway – all this is updated Moscow.

The impressionistic manner of writing tells the work freshness and dressiness – that is how the new capital should have been perceived, and with it the new Soviet life. However, the year this canvas was created clearly contradicts the optimistic theme of the “bright path”.