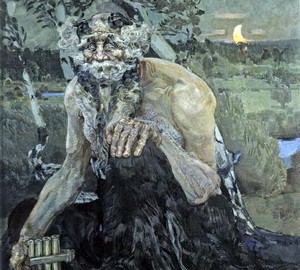 Among the paintings of the “fairy cycle”, researchers give the palm of the championship to this work. The classic plot of ancient mythology, inspired by the novelist Anatoly Frans, “sounds” in a completely Russian manner. The master draws the attention of the public very persistently.

It is known that the master himself called his work “Satir”, and the name “Pan” is the result of “creativity” of critics.

Before the audience, a mythical protector of natural wealth, pagan goat-footed pan. The background of the picture is the impeccably Russian landscape with birch trees, a decreasing moon and a river drowning in thickets. Lighted by moonlight, the goat-footed hero is more like a Russian fairy-tale goblin. The viewer clearly sees only the “human” hypostasis of the hero. The outlines of the bestial principle are lost in the shade. The viewer has the feeling that he is present at the moment of the wonderful appearance of the hero before the eyes of mortals.

Large senile hands with knotted fingers – as a reminder of an immortal life, wise, filled with special, inaccessible to uninitiated meaning. It is impossible to break away from the gaze of the guardian of natural treasures. His gaze shone, piercing and unusually kind. A smile got lost in thick mustache.

When calculating the disproportionate nature of the body, a violation of the perspective – all this only emphasizes the fabulous plot of the picture, its deep meaning and idea.