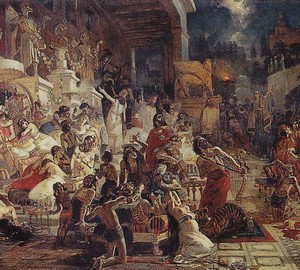 The king of Babylon, Belshazzar, is rich and powerful. Surrounded by slaves, faithful servants, priests and guardians, the king feels like the lord of the world. He eats and drinks from the sacred vessels of the Jerusalem Temple.

Everything collapses at one moment… A fire inscription appears on the wall, which only the Jewish prophet Daniel could decipher.

The eyes of all those present are riveted to a mysterious inscription foreshadowing the collapse and death of the king. The eyes of slaves, the nobleman, the king himself are filled with horror. In vain do priests turn to the statues of the Babylonian gods. Idols are silent. Wine spilled from a overturned jug, a bloody red spot on the carpet is another bad omen. The atmosphere of horror is overcome by lightning, breaking the black sky above the city.

Against the background of a general panic, the figure of the prophet looks monumental and majestic. Pointing to the inscription, he fearlessly informs the king of a formidable warning.

The dominant colors of the picture are red and gold. The wealth of Beltasar looks miserable and unnecessary at this moment. The king’s red, expensive clothes, noblemen, gives the picture additional drama.

The author made the mysterious inscription itself as the source of light in the picture.

Despite the fact that the work remained incomplete, it clearly shows the author’s confident manner, a talented composition that reveals the idea of the picture – the inevitability of God’s punishment.