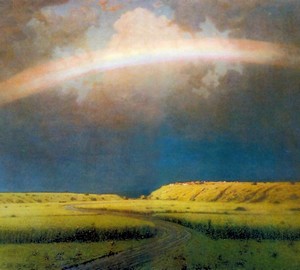 Arkhip Ivanovich Quinji is a unique landscape painter of the second half of the XIX – early twentieth century. He was attracted to exceptional and beautiful situations in the life of nature, associated with unusual moonlight or sunlight. A serious passion for astronomy, color and light physics will be reflected in the artist’s painting.

The picture “Rainbow” captures one of the amazing natural states described in the Bible. In the sky soaked in moisture from the rain, right on the cloud, multi-colored stripes of the rainbow are displayed. The theme of eternal and beautiful light, the incomprehensibility of the Universe, the mystery of the universe and everything that exists on earth constituted the main direction of Quinja’s creative searches. The master did not hide the almost mathematical fidelity of his landscape compositions; he was not embarrassed by bright color and light contrasts that enhance the effect of the paintings. Quinji, without diminishing the natural beauty of nature, emphasizes the saturation of the flowers of juicy greenery, bright, almost grotesque blue of the sky, thereby introducing a decorative element into his painting and giving the landscape a “picture” look.