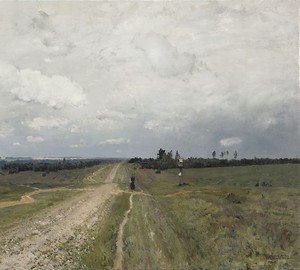 The historical landscape is a rare genre. The painting was written in that difficult period of the artist’s life, when he himself was sent outside of Moscow, in connection with his “foreign” origin.

From the Vladimir tract, the path of any convict of Russia in the 18th and 19th centuries began. It is very symbolic that the work was created a few years after the people sentenced to correction by Siberia began to be taken out on trains. The tract is resting. He is deserted. A lonely raving traveler makes the landscape even more deserted and lifeless. Unusual emptiness and silence fills the work with an alarming atmosphere, a special energy. In this intense silence, the cling of the shackles, and the woeful moans of the convicts, and the formidable shouts of the overseers are barely audible.

For the artist, the very appearance of this road is consonant with his own condition: an exile in his beloved country.

A huge and cloudy sky covers the Vladimirka leaving for the distance. There is no end to this path of suffering and grief. But in the distance, the white church is barely distinguishable. This symbol of timid hope for the best, bright, good, could not help but appear in the picture. Without this, by the way, the detail invented by the author, the mood of work would be even more painful and sad.

The pillar is also an important detail. He, like a metronome, recently measured the time of the hard labor and the suffering of the unfortunate.

The artist avoids bright colors, the whole landscape is consonantly written in dim tones. The tract that remains without “work” is gradually overgrowth, as does the human memory of past sorrows and troubles. But the anxiety and tension of the atmosphere does not give the viewer a single opportunity to relax and brush aside the problem contained in the work. By exclusively artistic methods, the author manages to draw attention to an acute social problem. Moreover, his methods did not give any opportunity for censorship to limit the availability of work to the mass audience.