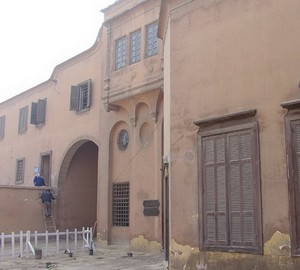 Royal Palace of El Gohara, the official residence of the Egyptian monarchs for a century and a half, is in the southern part of the Cairo citadel. The Museum’s building has been recently, but the exposure is noteworthy.

The Palace El Gohara was built in the early 19th century on the orders of the first of kings, Muhammad Ali. The Bishop decided to build his own residence to fully refuse from residences, reminiscent of the Ottoman rule in Egypt.

Surprisingly organic blend of European Baroque and Oriental art to create a magnificent and solemn atmosphere of the Palace.

Rich gilded stucco on the ceilings, sculptures, paintings, everything here emphasizes the grandeur of the Egyptian monarchy.

Foster, the throne room with furniture, display cases, with the Royal official and ceremonial clothes, everything in the exhibition is bright, attractive and interesting.

Guides must report, that the throne of Muhammad Ali – best in the world. In itself a controversial statement, however, the gift to Egypt from the Italian king actually makes a strong impression. The combination of bright red velvet with black wood, intricately carved, could not be better with Oriental flavor Palace.

Huge mirrors in massive frames were hung to all who came to the Royal audience, was able to put himself in order.

It is impossible not to draw attention to the massive chandelier in the throne room. It is a gift of the French Louis-Philippe. The weight of this lamp about a ton!

Exposure bedrooms Muhammad Ali to judge personal tastes and the preferences of the king, his character. It is here that will tell you about how the Egyptian king got rid of his enemies from among the Mamluks. Inviting them to a feast, the king ordered to kill them on the way out of the Palace. Refined and simple, in the Eastern taste…

A separate charge for visiting the Palace. The entrance ticket to the territory of the citadel of Cairo includes visits to the Royal Palace of El Gohara.