Pallada and Centaurus, Sandro Botticelli – overview of the painting 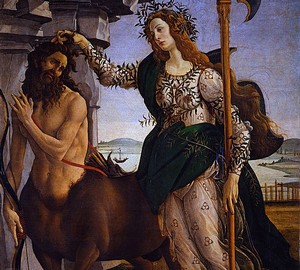 This large canvas carries all the features characteristic of the ceremonial image. For him, a mythological motive and characters are used – the warrior goddess Athena, called Pallada in cases where she was portrayed in military ammunition and with weapons. The second character of the picture is a centaur, a mythical creature also hailing from ancient Greek legends, a wild creature from the Dionyse retinue, characterized by uncontrolled behavior and violent character. This is a half-man, a half-horse, powerful and indomitable.

A very interesting plot was chosen for the picture – Pallas holds a quietly standing centaur by the lush curly hair, and he humbly bends his head, obeying her unconditional power. Here you can see the triumph of reason and civilization over the wildness and lack of control, which fits perfectly into the philosophical traditions of the Renaissance.

However, some researchers believe that the picture reflected the politics of the Medici clan, who defeated the conspirators who tried to overthrow them from the Florentine throne. This can also be believed, because the canvas was ordered to the master just about an important political marriage.

The two main characters of the picture are depicted against the background of a distant landscape, towering above a wide and deep sea bay. The mountainous gentle and steep banks, the quiet and smooth expanse of water and even the tiny boat with the sails, anchored away from the coast, are clearly visible. The place where the heroes of the picture are located is fenced off by some design like a fence or a frequencybreak from rarely located light logs.

The side of the canvas is occupied by a strange structure, which resembles the wrong old dilapidated building made of dark gray stone, or a rough structure carved from the rock. He does not have the right forms and lines, but this is not a natural education. Obviously, this is a hint of a primitive dwelling of the centaur – a creature far from a high ancient Greek civilization.

Of interest is the surface under the feet of the characters, or rather, under the hoofs of the centaur. This is a dense layer of short dark grass that seems to have failed or sagged under the massive body of a mythical creature. The edges of the earth are visible, clearly distinguishable against the background of saturated greenery.

The figures of Athens and the centaur occupy the entire area of the picture and are the center of attention of the audience. Pallas are depicted in a somewhat mannered and not quite natural position with a slightly thrown and head bowed to one side. She holds a huge, taller alebard, her head is decorated with a lush, airy greenery wreath. Her outfit is like a glass of green branches, has a rich floral finish, and on top is covered with large folds of a wide dark green cloak. On the feet of the goddess are original tall sandals of ochrist-yellow color, with open fingers.

The “horse” part of the centaur is a powerful muscular animal with the nest of suit, and the human half is a bare torso of a young bearded man. He is armed with a large bow, and behind his back he has a quiver full of arrow, but he dutifully bends under the dominee hand of the goddess Pallada. Civilization triumphs over savagery.