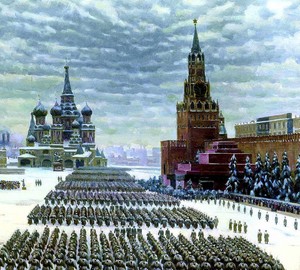 You can portray a war in different ways. It can be a battlefield strewn with lifeless bodies, or warriors who seek to attack in a heroic impulse. But sometimes an image devoid of external emotionality can tell much more about the tragedy and power of the people.

This painting also includes this canvas. It depicts Red Square with a military parade taking place on it in honor of the day of the revolution in that terrible period for the country when the enemy has almost come close to the capital. Right from the parade of tanks, other weapons, soldiers, officers and people’s militias went to the front, defend the homeland, save their families.

There is no dynamics in the image, because the clear rectangles of building soldiers emphasize the gloomy determination of the sons and daughters of the country to defend their independence and the right to life. The painful environment in which this parade took place is emphasized by lead-gray low clouds, personifying the threat looming over the country. But the red walls of the Kremlin, its ancient architectural monuments, which survived more than one invasion, seem to confirm that no enemy can resist such a united and strong people.

Separate figures on the canvas are almost impossible to consider. This artistic technique is used for a reason – this is a great way to demonstrate the unity of the nation, which has become one in resisting the impudent and formidable enemy.

Despite the fact that at that moment the Soviet Union suffered one defeat after another, defending every inch of its native land with blood and battles, the determination to defend its right to life inspires pride and confidence that tomorrow will be victorious. A country that, contrary to everything, is able to unite and demonstrate to the enemy an unbending will not be able to conquer anyone and never.