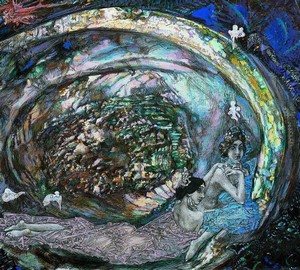 One of the last works of the great master. In it, he solves the most difficult task – the transfer of natural mother of pearl in black and white.

The idea of this work appeared at the artist thanks to the gift of Voloshin. The poet presented the master with a large sea shell, covered with a thick natural layer of mother of pearl. This fickle and iridescent material has become a source of inspiration.

In a small picture you can see the sea, and the night sky, and the mysterious beckoning infinity. At first glance, random spots at some point turn into fantastic creatures, soaring over raging waves.

Two female figures – like ancient goddesses – calmly watch the audience from the world of immortals. Under their gaze, the viewer begins to feel uncomfortable. There is a feeling of the presence of something unrecognizable. The look glides into the center of the picture, obeying the line and the rhythm of the work. The combination of shades of black and white, the inclusion of blue, blue, purple, yellow, green – create the effect of pearl overflow. The effect is so strong that many viewers change the angle of view of the work, waiting for a change in the order of colors.

The work made a strong impression on colleagues and critics. At its core, this work is the artist’s creative testament.