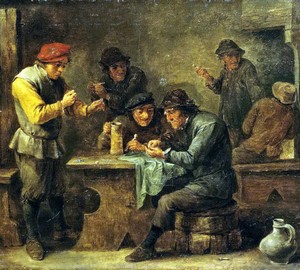 The peasants playing dice are David Tenirs the Younger. Around 1640. Oil on canvas. 26.6×35.5
From the middle of the XIX century. and further, including 1981, when a short catalog of works of Western European painting in the Hermitage was published, the picture was mistakenly called the “Eagle Game”. In 2005, this error was fixed. The work of Tenirs does not depict the game “Eagle or Tails”, but other entertainment is a dice game for which the edge of the table is specially drawn (although only a few lines scratched on the table are noticeable).

The elderly peasant sitting on the near plane after a successful throw of a bone cube (it is on the edge of the table) considers the money won. Opposite him is a young peasant. He shows a coin with his left hand, offering to continue the gambling. In his right hand is clamped a chip that he is going to throw on the table.

The plot and composition of the ermitage canvas go back to the picture “Battle soldiers playing dice” by Adrian Brauver (Old Pinakotheka, Munich). In both works, the action unfolds in a zucchini. On the left side of the semi-dark interior there is a door bundled from uncouth old logs. Both there and here on the floor you can see a white jug – the only decoration of a wretched room. In both cases, the table depicts two seated and two standing figures (two dice players and their “painlets”). In the depths of two paintings, two more characters are presented – a woman and a man at Braver and two men at Tenirs. The differences also affected the costumes of the dice players. Brower portrayed them in a soldier uniform, Tenirs – in peasant clothes. In both works, the theme “Vanitas” is heard, since they show the fleeting and vain nature of worldly entertainment.

Most likely, the ermitage canvas is performed around 1640, as well as the signature picture of Tenirs “Players in Dice” (approx. 1640, Reyksmuseum – Amsterdam). Both works, St. Petersburg and Amsterdam, were created in the early period of Tenirs’s work, when the artist was influenced by Adrian Braver.