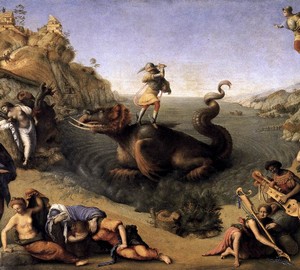 The Florentine artist Piero di Cosimo combined in his work harmonious, inspired images of the High Renaissance with love for the detailed image of the world around him, which he received from Dutch painters.

In the presented picture, written in the late period of creativity, the master used the ancient Greek myth of Perseus, saving Andromeda. Returning after defeating the Gorgon Medusa, the hero saw a girl tied to a rock. It was Andromeda, which the inhabitants of her native country sacrificed to the sea monster, who had devoured people, in order to get rid of him. Perseus in his winged sandals and a magic helmet that made him invisible is depicted in the picture twice – flying over the sea and standing on the back of a monster waving a sword. On the left Andromeda is tormented and hiding, closing with raincoats, frightened people, and on the right the people have fun and wave their laurel branches, glorifying the hero.

The inclusion of events of different times in the composition and their interpretation resembling a fairy tale testify to the still enduring traditions of the previous century – quatrochento, but the soft outlines of the figures and the landscape opened in the distance indicate that this work was created in the era of the High Renaissance.