Perseus and Andromeda, Anton Rafael Mengs – overview of the painting 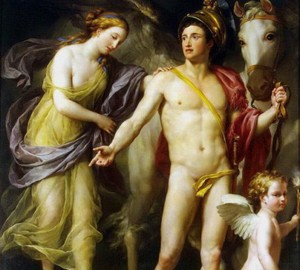 Anton Rafael Mengs, the largest German representative of neoclassicism of the 18th century, turned to the ancient heritage to search for perfect art forms. He bowed to ancient sculpture and often quoted the best marble examples of ancient art on canvas. The plot of the picture, borrowed from Greek mythology, tells about the feat of Perseus and the salvation of Andromeda from the monster to which she was supposed to be sacrificed. The image of the hero resembles the statue of Apollo Belvedersky, the pose of Andromeda is written off from an antique relief. The work gives rise to associations with a clearly staged theater stage, where each character froze in a certain position.

The fate of the canvas is interesting: written in Italy, it was sent to the customer in England, but the ship was captured by pirates. They resold the work to the French Minister of the Sea, and from him the picture fell into the collection of Catherine II and is currently decorating the German art hall in the Hermitage.