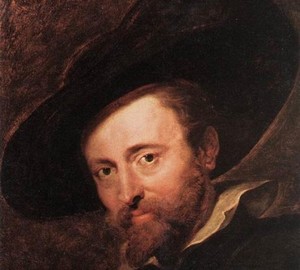 In the brilliant cohort of Flemish painters Peter Paul Rubens occupies a dominant place. His creativity begins an extraordinary flowering of the art of the Netherlands of the XVII century, due to the revival of the country after years of war for independence. This heyday was short-lived, but Rubens has made his true age of painting.

Peter Paul Rubens was born in Germany in 1577, in a family of Flemish lawyer, for religious reasons fled his native Antwerp. The father dies a year after his birth, and after 10 years the family returned to Antwerp, where the mother has a property and modest savings for life. Rubens begins pages ‘ service in the count’s house and soon shows a strong interest for drawing, which his mother has to give him, despite their own plans for education of his son. In the spring of 1600 future genius goes towards the sun painting, shining from Italy.

Rubens spent in Italy for 8 years, writing a lot of custom portraits and showing his outstanding talent, making this genre is life, expression, color. Innovation was his way carefully to prescribe the landscape and background details of the portrait.

Returning to Antwerp for the funeral of his mother, he stays at Home and accepts an offer to become court painter to the Archduke albert and the Infanta Isabella. He was young, incredibly talented, possessed of endearing charm and a real man’s beauty. His sharp mind, brilliant scholarship, and a natural tact made him irresistible in any communication. In 1609 he married the daughter of statesecretary Isabella Brant, in the hot, mutual love. Their Union lasted until 1626, to the untimely death of Isabella, and was full of happiness and harmony. To this marriage were born three children.

During these years, Rubens works efficiently and his fame is growing. He is rich and can write the way he tells a divine gift. Biographers and researchers of creativity of Rubens unanimous in its extraordinary freedom in painting. While no one could accuse him of violating the canons or audacity. His paintings give the impression of the revelations he had received from the Creator. The power and passion of his creation, and to this day inspire the spectators with awe. The scale of the paintings combined with amazing compositional skills and subtly spelled out details create the effect of immersion of the soul into a work of art. All the subtleties of experiences, the whole gamut of human feelings and emotions were subject by Rubens, connecting with a powerful technique of the artist in his creations, most of which are happily preserved to the present day. Rubens opened his own school, considered the best in Europe. Not only painters, but also sculptors, and engravers were trained by a Master. Anthony van Dyck and Franz Snyders continued in his glory.

After the death of Isabella suffered grievously from the loss of Rubens even suspended their work and gave several years of diplomacy. In 1630 he again married a young Helen Forman (Fourment), a distant relative of the deceased wife. She gave him five children. Family lives out of town, and Rubens painted many landscapes, rural holidays in the lap of nature. He is once again happy and peaceful. His Mature mastery becomes majestic and close to absolute perfection.

Later begin to affect the years of continuous labor, Rubens tormented by the gout, his hands refused to obey, the disease progresses rapidly. But then his natural optimism and sense of fullness of life never leave him. 30 may 1640 in full splendor of glory and the flourishing of the talent of Peter Paul Rubens leaves the earthly world. He was buried with unprecedented honors, and in recognition of the greatness of his merits before the bier carrying a Golden crown.