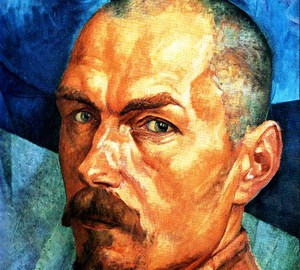 This talented artist mostly known for the famous painting “bathing the red horse”, written in 1912 and is traditionally perceived as a harbinger of the revolution in Russia, although he interpreted it as a subconscious feeling of impending war (the First world). In fact, the artist has been very variously gifted man, and were engaged not only in painting but also ceramics, paintings and create scenery for various theatrical scenery.

He was born in a simple family of shoemakers in the city of Saratov Khvalynsk province of the then, in 1878. His father famously was the only one in the whole town is a shoemaker, not to touch alcohol. The reason for this was a terrible tragedy of childhood, who gave his son the name “Vodkin” and a strong aversion to alcohol. His father, in a drunken rage stabbed his wife to death and himself died soon after in terrible agony. As his father’s name was Peter, his children acquired the surname Petrov, and along the way, and nickname — Vodkina.

Young Kuzma was not going to become an artist, he was in elementary school and planned to become a railroad man. However, as sometimes happens, fate had its own way. Familiarity with the iconography struck the boy, and he began to try his hand at art. He began to study in Samara at Fyodor Burov, but was interrupted by the death of the latter.

Fate once again intervened in the life of the master, when his work caught the eye of renowned architect Robert-Friedrich Meltzer. He took the young man to St. Petersburg, where he helped him with his training at the Central school of technical drawing of Baron Stieglitz, who later became better known as the Mukhina Academy.

The first work of Kuzma Petrov-Vodkin as a Mature independent artist perfectly preserved to our days. It’s an icon in the majolica technique on the Church wall in the Alexander Park. It impresses both the canonicity of the image, and innovative execution.

In 1897, the artist moved to Moscow, where until 1905 studies in the School of painting, sculpture and architecture in the class of Valentin Serov. The next three years, he has been travelling and studying in different European countries. At this time, his paintings have a strong influence of modernism and symbolism. Subsequently, however, he has his own original style of writing, which can be considered the alloy of realism and several of the modern trends in painting.

In 1911, the artist becomes a member of the Association “World of art”, after 8 years — one of the founders of “Wolfie” — “the Free philosophical Association”, which existed until 1924.

In the Soviet period the wizard was demanded. He wrote paintings, worked on the graphics and created the scenery, taught classes, wrote articles on art and gladly gave herself to literary work.

In 1932 he became the first Chairman of the branch Union of artists in Leningrad. The master died in 1939, leaving behind a vast material and spiritual heritage.