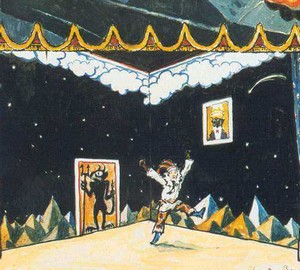 Everyone knows about the famous Russian ballet seasons that took place in Europe at the beginning of the 20th century, under the direction of Sergey Pavlovich Dyagilev. And it is not surprising that he, as an experienced organizer, attracted the most talented assistants, and among them, of course, was Alexander Nikolaevich Benoit. After all, his artistic work is inextricably linked with theater and ballet.

So, in the ballet Petrushka, Alexander Nikolaevich took part in the creation of theater decorations, as well as costumes and even in writing libretto. According to his sketch, made on paper with pencil, the room of Petrushka was performed in the ballet decorations.

The viewer sees Scene II from the ballet “Petrushka”. The main background of the decoration is quite simple, but very effective – black starry sky, a portrait of an star-bearing, doors with the image of the devil.

Why did he see Petrushka’s room Alexander Benoit in this way? After all, Petrushka is a folk favorite, balagur, a lively and cheerful character from the street. It would seem that bright, red, rainbow colors would emphasize its ridiculous and perky nature.

But Stravinsky’s brilliant music is built in such a way that the plot is dramatized during the action. In the first and fourth stages – funny and bright masquerade festivities for oil, and in the middle – the soul and tragedy of dolls.

Artist Benoit believes that only here in this room is Petrushka a dreamer and a rebel, and not a character of folk joke and humor. Only here can he express all the drama and tragedy of his fate, his undivided love for Balerin and the premonition of future death.

Alexander Nikolaevich perfectly understands the essence of the character and the dark room becomes harmonious, and it becomes clear to the audience that it is such scenery that should surround this hero. Benoit also did sketches of the Petrushka room for ballets, which were staged in 1917 and in 1918. They are not much different from the original version.