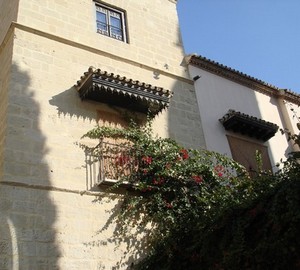 Every self-respecting traveler who visited in Spain, will definitely come to Malaga and visit the house-Museum of Picassowho was born in this city.

The Museum was founded in 2003 by the local authorities and the heirs of Picasso. It contains 233 works by the great masters – paintings, sculpture, pottery. 204 exhibit to the Museum gave the family of the artist, sister-in-law Christina and grandson Bernard, from their private collections. His contribution made and other relatives.

In the Museum of 14 roomsin which there is a permanent exhibition. In addition, all the time there are temporary exhibitions.

Castle BUENAVISTA, which houses the Museum, was built in 1530. The building was built in the Andalusian style buildings of that time and has elements of mujedar. Over the years it has changed not a single host, while Spanish king Juan Carlos gave it to the Museum.

The Museum has become the embodiment of the dream of the Picasso – to see the collection of his works in his hometown.

There is work that reveals the creative growth of the artist. They clearly can be considered the changing nature of the author. The paintings can be traced and his personal life.

All the works that are in Spanish Museum for Picasso, according to various estimates, up to several hundred million euros. A true gem from the collection of the Museum is the first portrait of the artist’s wife, Olga Khokhlova who was a ballerina from Russia.

The Museum is open to visitors every day, but the time of opening and closing, better to clarify. Half an hour before closing the box office for tickets sells. If the child is 13 years old and he is accompanied by an adult, for a child ticket free. Every month on the last Sunday in the Museum entry is free.

People who visited the Picasso Museum in Malaga, can not remain indifferent. True connoisseurs of the great artist will learn a lot about the author from the wonderful guides. And people got here by chance, very often, are addicted to not only Spain itself, but also the works of Picasso. Who cares, he can read a biography of Picasso.

This magnificent Museum was a real tribute to the art. It clearly shows the attitude of the Spaniards by the works of Picasso.