Picture A. G. Venetianova “Girl in a fiber scarf” – overview 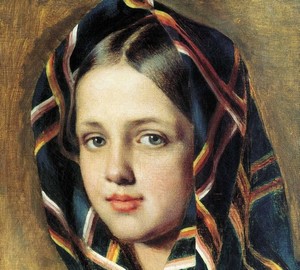 The girl in the checkered scarf is Alexey Gavrilovich Venetianov. Oil on canvas. 40.4 x 31.1 cm

Venetianov devoted his whole life to the image of a simple people. In 1819, the artist leaves St. Petersburg and settles in his small estate – the village of Safonkovo in the Tverskoye province. He no longer writes portraits to order, but depicts serfs: men, women, children, and does this with love and respect. Among these works there are a number of paintings with amazing female images. One of them is the described picture.

This small sketch leaves an indelible impression. The artist portrayed a young girl, almost a girl. Its image occupies almost the entire space of the canvas. The girl has a bright, spiritualized face. She is a classic type of Russian beauty. Clear gray eyes look at the viewer, a half-smile froze on the chubby lips, the cheeks are slightly pink from embarrassment. The blond hair divided into the probe is hidden under a large dark blue checkered scarf, which it supports with its hand so that it does not slip off its head.

The scarf was of great importance in a Russian folk costume. He was worn by women of all estates and ages. And a married woman had to cover her hair with a headdress. The scarf was considered a good gift. It was an integral part of the dowry, which was prepared long before the wedding. Perhaps this scarf was presented to the girl by the artist himself in gratitude for the position, or maybe it was her personal thing. In any case, the scarf shades the natural beauty of the young peasant woman and focuses the attention of the viewer on her radiant face.

Only hands give out the status of a girl – it is clear that she knows firsthand what hard village work is, because then the children started helping their parents early.

The artist’s background of this is not intentionally worked out. The master writes a female figure on a brown background. He does not distract the attention of the viewer from the girl herself. Her pure image involuntarily attracts the gaze and remains in her memory.

Venetianov in his works left us many bright types of serf peasants. Behind each of them is a person, a living person. The artist shows that serfs, who were then in a slave position, are capable of sublime feelings. They are strong in spirit, beautiful, with a wide, Russian field, soul and big heart.

His female images of peasant women portray women and girls from an early age who know what hard work is, but beautiful with their inner world, attractive with natural, natural beauty.

It is not surprising that not all contemporaries appreciated the scale of the talent of the provincial artist. The image of village life, and even more so serf peasants without embellishment in the best traditions of realism, was considered a “low” genre. Venetianov never became an academician and teacher at the Imperial Academy of Arts, despite the fact that in his estate he managed to teach paintings by many talented peasant children.

The artist died in obscurity, but his creations still delight people, singing the Russian people and the Russian land.