Picture “Burlaki on the Volga”, Repin 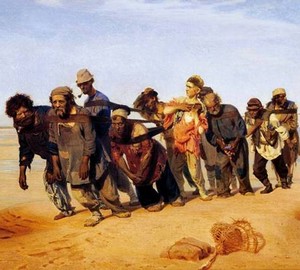 The work of Repin of the 1870-1900s was a landmark for contemporaries and became an illustration of this time for posterity. It largely absorbed the problems of the second half of the 19th century. The features of a reforable Russia, the unfulfilled aspirations and hopes of the Russian intelligentsia were reflected in art and literature in the popular topic of social inequality, criticism of the country’s social and political system.

Seen by young Repin (1844-1930) in 1869, the Burlaki, who dragged the unbearable cargo barge, excited his soul. The artist developed this topic, leaving for the Volga, over the years. The imprinted oppression of the poor was a call for mercy towards a simple person. It is amazing how, in a crowd that seemed to be impersonated by hard labor, the painter revealed the individual features of each of the burlaks, endowed them with character, fate, which is read in unbridled faces for years.

Thanks to the contrast introduced by Repin, the string of slaves and the spread expanse of the wide, full-blooded Volga with a white sailboat in the background (unconsciously associated with freedom with the viewer), the master was able to pronounce a sentence on a modern society that severely enslaves the disenfranchised.