Picture “Christ in the Garden of Gethsemane”, Archip Ivanovich Quinji 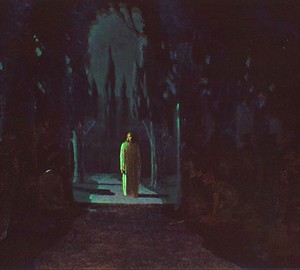 At the end of the 19th century, the dawn of Russian philosophical thought came, and art, as a way of knowing and displaying the world around us, could not remain aloof from this scientific and humanitarian surge.

It is not surprising that many global thoughts about the problems of the universe, sin, atonement and forgiveness, about the place of man in the Universe affected Quinja. To whom, if not to him, who knows how to see incredible beauty in the mundane, able to discover the inner content of a simple landscape, catch his mood and pass it on a canvas, do not reflect on the world order. Perhaps the most philosophical and mysterious work of the master is Christos in the Garden of Gethsemane.

Bible history tells how Jesus came to the Garden of Gethsemane immediately after the Last Supper, taking with him only three of his disciples. Several times he went into the depths of the garden in order to offer one prayer and indulge in suffering because of his inevitable fate. In the most difficult moments an angel appeared to him in order to strengthen his spirit. Guardians, led by traitor Judas, will already take him out of the garden.

As you can see, none of this is in the picture. The only work of the master on the evangelical plot is characterized by laconicism and dark color. We are barely able to see trees protruding from the night darkness. The author did not set as his goal the narrative disclosure of the storyline, but pursued artistic and historical tasks – to depict the effect of moonlight, which snatches the hero from the dark, and thereby creates the core of the composition, drama and climax.

Unfortunately, Quinji did not leave any written hints or clarifications about this work of his, so the mystical picture, where Christ in the mysterious radiance of the moon enters the dark gallery of the garden, remains the most mysterious of the entire creative heritage of the painter.

For the first time, the author showed the work in 1901 after 20 years of absolute silence. The audience was chosen by the Quinji Archipus himself – he invited 4 students to his house. The author presented 4 new canvases, among which the painting “Christ in the Garden of Gethsemane” stood out as a surprise to the Russian master of poetic landscape. The next mini-exhibition took place a little later, and again only for a limited circle of people. Among the guests of Quinja were chemist Dmitry Mendeleev with his wife and writer Jerome Yasinsky, who compiled an enthusiastic article about this home exposition – “A. Magic Session. AND. Quinji. “.