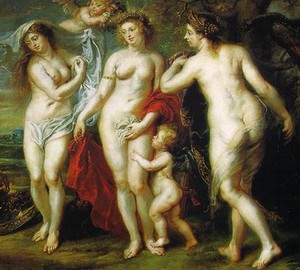 Rubens has several paintings on this plot: he was attracted by the opportunity to write three beautiful naked women against the background of a perfect pastoral landscape.

In the version that is in front of us (1639), Paris is depicted in a shepherd’s outfit, gazing intently at three magnificent naked women whom he asked to take off his clothes so that nothing would stop judging their beauty. He admires the goddesses standing in front of him from different angles. Mercury holds an apple, which will become a reward to the winner. Minerva (Athena) is depicted with an owl (her armor is nearby), Venus (Aphrodite) is accompanied by her son Cupid, and to Juno (Geru) – a peacock. The meek appearance of the goddesses and graceful postures do not portend the fatal consequences of the decision that Paris must make and which led to the Trojan war.

PARIS. When the son of Paris was born to the Trojan king Priam, it was predicted that he would cause the death of his country. Father ordered the baby to be killed, but the servant entrusted with it left him on Mount Ide. Paris was found and raised by shepherds.

In the famous court, Paris was assigned the role of a judge who was supposed to present the award – the golden apple of contention – the most beautiful of the goddesses. The young man offered to make him the most powerful of the kings, Minerva – the bravest hero, and Venus promised him the love of the most beautiful woman, Elena from Sparta. This influenced the decision of Paris and the prize went to Venus, but this decision caused a grudge against Juno and Minerva. Paris decided to abduct Elena. The Greeks, threatening the Three with war, demanded that it be returned. Thus, the court of Paris caused the Trojan war, which ended in the destruction of Troy.