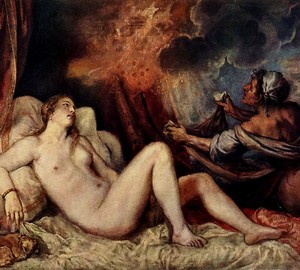 The representative of the Venetian school, the greatest Italian painter of the Renaissance, Titian (1476 / 1477-1576) is on a par with artists such as Michelangelo, Leonardo da Vinci and Rafael. The master painted on biblical and mythological subjects, was an outstanding portrait painter.

In the Renaissance, the myth of Danae performed in art as a form of artistic generalization. Titian repeatedly addressed this image, wrote several options for “Danai”, one commissioned by the king of Spain.

The Argos king of Acrisia had a beautiful daughter Danae. The Delphic oracle predicted to the king that the grandson would deprive him of his throne. Akrisy imprisoned his daughter in a copper tower, where none of the mortals could penetrate. But Zeus, captivating, penetrated her with golden rain. After the future hero was born – Perseus. The meeting between Danai and Zeus takes place against the backdrop of sunset, soft colorful tones seem to dissolve in each other. The figure of a naked woman is similar to the sculptures of Michelangelo “Aurora” and “Night” from the Medici chapel, but the color of the picture remains truly Titian: the colors seem to flicker from the permeating light, emphasizing the intensity of the feelings of the heroes.

“Danaya” presented the artist with the opportunity to create a female image, not just flooded with light, but as if consisting of it. A figure woven from golden rays became a discovery in painting. A subtle and smooth transition from a record to a shadow, the rejection of dividing lines laid the foundation for a new creative period of the 1550s. “Danaya” turned Titian from a talented painter into the genius of her era.