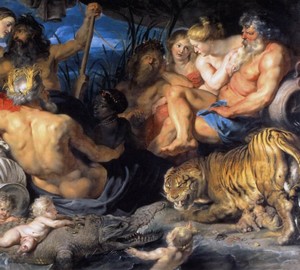 A fruitful artist and energetic diplomat, Rubens traveled a lot and was friends with many European rulers; two of them elevated him to the knightly title. He was a highly educated person and often included symbols of ancient mythology in his picturesque allegory. Inverted urns are attributes of ancient gods who lived in the rivers of 4 continents of the world: Africa, Asia, Europe, America. These river deities are shown by vacationers under the canopy, surrounded by the attention of naked women. Tigress represents the Tiger River, and the paths play with a crocodile, a symbol of the Nile.

CONTINENTS. Four continents were often depicted in works by Baroque artists. An example is the huge ceiling fresco of Tjepolo APOLLON and four continents (approx. 1750). Parts of the world are often personified by river deities and can appear in painting along with animals characteristic of these places or rely on urns from which water flows; the head under the veil indicates that the source of the river is unknown. Africa can wear corals, portrayed with sphinx, with a lion or an elephant; America is wearing a feather hunter costume, and coins symbolize rich natural resources; Asia can be depicted with a camel, rhino, elephant, palm trees, precious stones or exotic incense, and Europe — in the form of a bull or horse, and she can hold the horn of abundance or the crown of superiority, sometimes surrounded by figures, representing art.