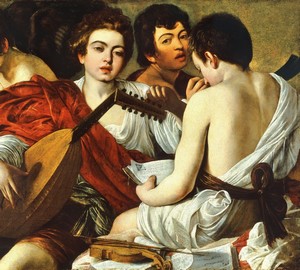 At the time of writing this work, Michelangelo da Caravaggio was still young and, despite his daring temper, led a fairly calm life in the house of his patron Cardinal, Cardinal Francesco Del Monte. The time of dramatic events in the fate of the artist and his fulfilled passions, the struggle of light and darkness of paintings, which will have a strong influence on all European painting, has not yet arrived. His paintings are still bright and lyrical. They are often play music, as in the presented work, in which blooming youth and sublime art merge into harmony.

A musician sitting on a canvas with his back to the audience revealed the scorer. An inscription is visible on it, which should more accurately explain what is happening. This is an uncommon technique in the work of Caravaggio, but no one has yet been able to read what was written. A boy with a horn in the background is the earliest of the artist’s self-portraits, who will repeatedly portray himself in his paintings, and this is the last Caravaggio self-portrait in which we see him as serene.

The Musicians still hear the breath of the Renaissance. But in the dense and complex composition of the work, in the twisted tissues of clothes and draperies, those tension and a slight nervous trembling that distinguish the art of baroque are felt.